Robot that can cut out hard-to-reach throat tumours through patients’ mouths: Pioneering operation reduces need for chemo and radiotherapy

British surgeons are using a cutting-edge robot to remove difficult-to-reach throat tumours – through the mouths of patients.

The pioneering operation is designed to dramatically reduce the need for gruelling radiotherapy and chemotherapy, which can leave patients unable to swallow and dependent on a feeding tube for life.

With growing numbers of people developing throat cancer, it is more important than ever to have a range of effective treatments that lessen the impact on quality of life, says Asit Arora, consultant head and neck surgeon at Guy’s & St Thomas’ NHS Trust in London.

Once most common in elderly people with a history of drinking and smoking, rates of head and neck cancers have soared by 31 per cent in the past 25 years and are now as common in people in their 50s as in those in their 80s. 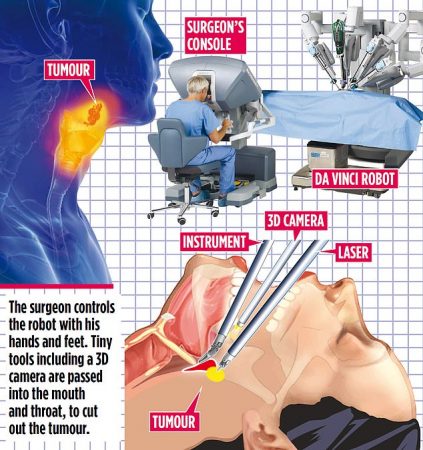 The 90 minute operation is designed to dramatically reduce the need for gruelling radiotherapy and chemotherapy, which can leave patients unable to swallow and dependent on a feeding tube for life

HPV can also infect the mouth and throat and is now to blame for at least half of throat cancers in the UK. Until a tumour occurs, the infection is typically symptomless.

Conventional treatment for early-stage throat cancer involves either powerful radiotherapy and chemotherapy to destroy the tumour, or laser surgery to cut it out.

Courses of radiotherapy and chemotherapy are time-consuming – some patients make up to 30 trips to hospital over a few months. The treatment can also damage the jaw and the swallowing muscles, meaning patients cannot eat without the help of a feeding tube.

Laser treatment is more gentle on the body but it can be difficult to cut out a hard-to-reach cancer completely and most patients need radiotherapy afterwards. Some also need chemotherapy.

Using the robot, the surgeon can zero in on the tumour and cut it away precisely. With the patient under general anaesthetic, the surgeon controls the robot with his hands and feet. One of the robot arms holds a 3D camera, while two others wield tiny instruments that can be passed through the mouth and into the throat, and turned and twisted in ways impossible with the human hand alone.

Surgery in the mouth and throat can be challenging because you are working in very small areas, manipulating surgical instruments in a tight space where there are important nerves and blood vessels to be avoided,’ says Mr Arora, who has pioneered robotic surgery for throat cancer in the UK.

‘With the latest robotic systems, we can be more targeted than ever before in how we treat these throat conditions in order to reduce unwanted side effects, particularly related to swallowing.’

Studies suggest that trans-oral robotic surgery (TORS) is at least as good as conventional surgery, although a definitive comparison has yet to be carried out, says Mr Arora. But importantly, by cutting out the tumour so precisely, it may reduce the amount of chemotherapy and radiotherapy patients need.

A £4.5 million Cancer Research UK trial into the procedure is now being carried out at Guy’s and hospitals around the country.

Mr Arora has used the method to remove about 30 throat tumours in the year since setting up the service with Jean-Pierre Jeannon, Guy’s clinical director for cancer.

The operation takes 90 minutes and patients are usually discharged after two days. They then undertake rehab, including speech therapy.

Retired policeman David Wonfor, 60, chose to take part in the trial after being diagnosed with early-stage throat cancer last summer. After his operation, David, 60, of Petts Wood, Kent, started on five weeks of low-dose radiotherapy. Although he lost weight and his sense of taste at first, he has now largely recovered, and says he is convinced that his recovery would have been very different if he had had chemotherapy.