Michael Douglas regrets calling this “the best cure” for cancer

For decades, Michael Douglas has been box office gold, starring in blockbusters such as Wall Street, Fatal Attraction, and Basic Instinct, to name just a few. But in 2010 the actor made headlines for a different reason when he revealed that he’d been diagnosed with throat cancer at the age of 65. After successfully undergoing both chemotherapy and radiation, the star made a full recovery—but three years later, he revealed it wasn’t actually throat cancer he’d been battling against. Read on to find out what it really was, and why he regrets making an unusual claim regarding what caused his condition, as well as what “the best cure” for it was. 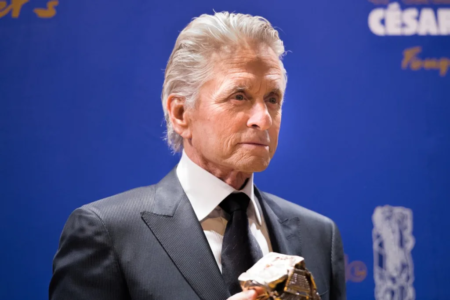 In the summer of 2013, Michael Douglas spoke to the Guardian about his experience with what he then described as throat cancer. After “many months of oral discomfort… a series of specialists missed the tumor and instead prescribed antibiotics,” reported the Guardian. “Douglas then went to see a friend’s doctor in Montreal who looked inside his mouth using a tongue depressor.”

The doctor discovered the tumor and ordered a biopsy, and Douglas was soon diagnosed with stage 4 cancer. Recalling his eight grueling weeks of chemotherapy and radiation, and subsequent liquids-only diet—during which he lost 45 pounds—Douglas told the Guardian it was a “rough ride,” adding, “… the amount of chemo I was getting, it zaps all the good stuff too. It made me very weak.”

Later that year, Michael Douglas fans were surprised to learn that he had actually been fighting tongue cancer—not throat cancer, as he originally told the media. “Douglas said he hid the diagnosis at the urging of his doctor to protect his career,” CNN reported, noting that Douglas explained that “the surgeon said, ‘Let’s just say it’s throat cancer.'”

Brian Hill, an oral cancer survivor and the founder of the Oral Cancer Foundation, theorized about why Douglas would hide the diagnosis of throat cancer. “The treatment up until just recently can be very brutal,” Hill told CNN. “Your career as a leading man could be over. If you have signed a contract to promote a movie, you would have a strong motivation not to say … ‘Maybe in six months I won’t have a tongue or lower jaw.'”

Oral cancer, also called mouth cancer, is categorized as a type of head and neck cancer and refers to cancer that occurs on the lips, gums, tongue, inner cheeks, roof the mouth, or under the tongue, as described by the Mayo Clinic. The American Cancer Society recently estimated that there are approximately 12,470 new cases of laryngeal cancer (often referred to as throat cancer) in the U.S. in a year, with about 3,820 people dying from the disease.

“Researchers estimated that more than 68,000 men and women in the United States would be diagnosed with head and neck cancers in 2021,” reports the National Cancer Institute (NCI), which also says head and neck cancers make up almost four percent of all cancers in the U.S. “Most will be diagnosed with mouth, throat, or voice box cancer,” they explain. “Paranasal sinus and nasal cavity cancer and salivary gland cancer are much less common.”

“There is a big increase in HPV-related cancers, and one of the main ones, if not the main one, is throat cancer,” Marc Siegel, MD, told WebMD. The Centers for Disease Control and Prevention (CDC) reports that “HPV is thought to cause 70 percent of oropharyngeal cancers in the United States.”

However, Douglas later walked back his bold claim about what caused his cancer—and what the “best cure” for it was. Speaking with the Daily Mail in 2015, he said, “I so regretted any embarrassment that it caused Catherine and her family. I was trying to make a public service comment.”

Via WebMD, Seigel clarified: “Saying that oral sex is also the ‘cure’ is a joke. He is trying to tell you about courage in the face of illness.”