When the medical community finds a treatment for a particular cancer, the work doesn’t stop. Researchers continue to study how treatments can be improved in order to reduce side effects and the possibility of the cancer recurring.

University of Cincinnati researchers are leading a new clinical trial to examine if the combination of a more localized radiation treatment and immunotherapy can be a better treatment for patients with recurrent head and neck cancer.

Chad Zender, MD, said head and neck cancers include cancers of the tongue, throat, tonsil and larynx, and about 30%-50% of patients treated through surgery and radiation will have their cancer return. Patients often then undergo additional surgery and/or radiation treatments, which can lead to side effects like problems with speech and swallowing.

“The quality of life is significantly less in the patients that require [subsequent] surgery and then radiation with or without chemo,” said Zender, professor in the Department of Otolaryngology in UC’s College of Medicine, director of head and neck surgery and principal investigator for the new trial.

Precision radiation
Zender said the trial will test a more localized radiation delivery method through a radioactive seed, about the size of a grain of rice that emits an intense amount of radiation to the cancer and only minimal radiation outside to other areas. The radioactive Cesium-131 seeds are implanted directly into the operative site during surgery. This approach in early studies appears to give more localized radiation to high risk surgical areas with less damage to healthy surrounding tissue than traditional external beam radiation.

“What kind of walked me down this was seeing how miserable many of these patients were, even the survivors in terms of a quality-of-life standpoint after [subsequent] surgery and radiation, and really being able to offer something potentially equally effective but with less side effects,” Zender said. 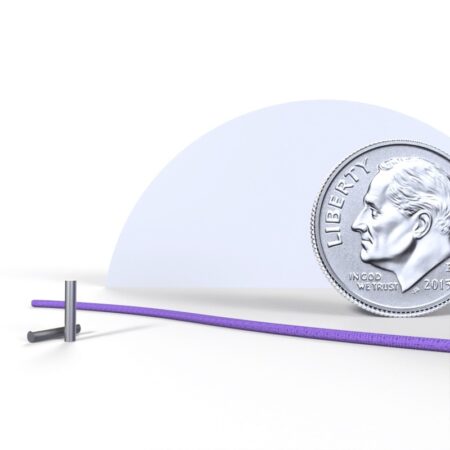 The radioactive seeds, left, that are implanted into tumors during surgery are smaller than a dime. Photo courtesy of Isoray

In addition to being more localized and reducing side effects, the surgically implanted radiation Cesium-131 seeds will eliminate the need for daily visits to the clinic for radiation treatment and potentially offer patients faster recovery times.

“This is an exciting opportunity to get patients on a therapy that looks promising based on our preliminary data,” Zender said.

Combining treatments
Past studies have shown the radiation may also enhance the effectiveness of immunotherapy treatments, so patients enrolled in the trial will also be treated with an immunotherapy drug that has been shown to be effective in head and neck cancers. Immunotherapy helps boost and train the body’s own immune system to identify and kill cancer cells.

“The goal is to look at disease-free survival as a primary measure,” Zender said. “So we want to see how many folks go on to live and for how long without any sign of cancer coming back. Overall survival and side effect profiles will be secondary outcomes that we’ll look at as well.”

Zender said three patients will be enrolled in the Phase 1 trial to evaluate the safety of the combination of the treatments. If the treatment plan is found safe and effective, a Phase 2 study would look to expand the trial to an additional 50 patients. Additional trial sites are being opened at Thomas Jefferson University and Case Western Reserve University, with the hope that about one to two patients will be enrolled each month and the trial will be completed in about two years.

Zender said the most common risk factors for head and neck cancers are tobacco and alcohol use, but in the last 15 years there has been a “tremendous increase” in tonsil and tongue base (throat) cancers caused by HPV.

“Most rates are decreasing because of tobacco and alcohol cessation, but HPV-associated head and neck cancer is actually increasing at a rate faster than and has exceeded HPV-associated cervical cancer,” Zender said.

Zender noted the treatment offered in the trial will not be appropriate for all patients with recurrent head and neck cancer, but he encouraged those who think they may qualify to seek more information and evaluation. For more information on the trial and eligibility, call 513-584-7698 or email cancer@uchealth.com.