Surgeons used skin from a man’s arm – including a tattoo of the grim reaper – to reconstruct his tongue and voice box in a life-saving operation.

Colin Reilly from Bristol, had to record his own voice before surgery in case he lost the ability to speak in the operation to remove a tumour.

As part of the operation his jaw had to be split and the lower half of his face reconstructed when it was completed.

Mr Reilly said there is “not enough” he can do for the hospital that saved him.

Mr Reilly, 50, was diagnosed with throat cancer in 2020 and an endoscopy found a tumour at the back of his tongue.

Between October and December 2020 he underwent six weeks of radiotherapy and was fed through a tube, but it became clear the tumour was very advanced and without treatment Mr Reilly would have six months to live. 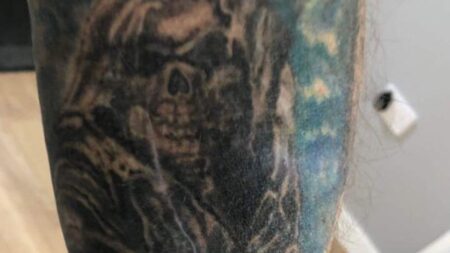 The grim reaper tattoo was taken from his forearm 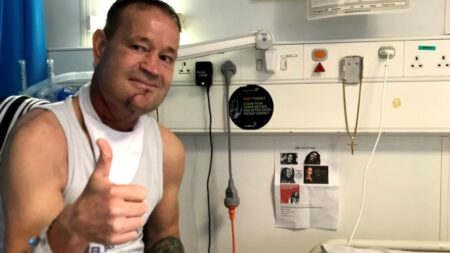 Ear, nose and throat specialist Dr Oliver Dale said he was willing to carry out the surgery at the Bristol Royal Infirmary, despite the position of the tumour making the surgery high risk – with the chance Mr Reilly would not be able to speak or eat again.

“He told us that he believed he could do the surgery, despite how difficult it was.

“It meant so much to us that he was so encouraging.”

Jaw split for surgery
Before the operation Mr Reilly’s voice was recorded so that if he needed to using a speech-generating communication device in the future, it would feature his own voice.

The operation, which took place in May 2021, involved Mr Reilly’s jaw bone being split to allow access to the tumour at the back of his throat.

Working to preserve the blood vessels and nerves connected to his tongue, surgeons used microscopic techniques to reconstruct the section of tongue that had to be removed and his voice box.

It was this part of the procedure that saw the grim reaper moved from Mr Reilly’s forearm to the back of his throat.

Dr John Collin, the maxillofacial consultant who led on the reconstruction element of the surgery, said: “I’m sorry we spoiled Colin’s tattoo, but it’s always good to get one over on the grim reaper.”

Dr Dale said 12,000 people were diagnosed with throat cancer in the UK each year.

“Recent technological advances mean that we are able to treat cancers where previously it may not have been possible,” he said.

“In Bristol we are lucky to have a fantastic team who work closely with patients like Colin to help them achieve good outcomes following treatment for advanced head and neck cancer.”

Surgeons amazed by speech
On his first day in intensive care after his surgery, Mr Reilly surprised the medical staff when he managed to speak.

“Oliver [Dale] nearly fell of his chair, he was so surprised!” he said.

Mr Reilly then worked with the hospital’s speech and language therapist Dayna Freeney on speaking and eating as he recovered.

“Colin had good speech function while in hospital and after two weeks he was able to protect his own airway, so we were able to have this tracheostomy taken out,” she said.

Twelve weeks after his surgery, Mr Reilly was told scans had shown the tumour had been fully removed and he had nothing to worry about.

His partner Lisa said it felt like the hospital team were “family” during the past two years.

“Going through such a terrifying time, not only did they help Colin so brilliantly, but I don’t know what I would’ve done without their support, which in turn helped me to support Colin. Incredible people.”

Mr Reilly said he now wants to help people who find themselves in the same situation.

“I know I’ve been lucky, years ago I had a friend who died of throat cancer,” he said.

“I thank God for the technology and surgical advancement which have given me this second chance.

“There not enough I can do to pay the hospital back.”