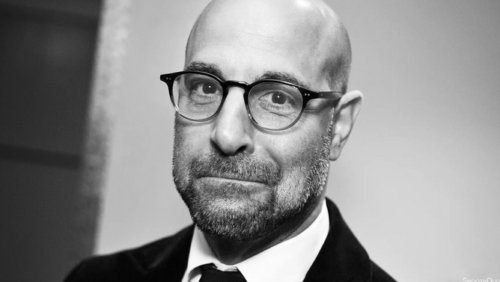 Actor Stanley Tucci is known for his roles in films such as “The Devil Wears Prada,” “The Hunger Games,” “The Lovely Bones,” “Spotlight,” and “Julie and Julia.” But now he is becoming known for another role — cancer survivor.

In an interview in the September 2021 issue of Virgin Atlantic’s inflight magazine Vera, 60-year-old Tucci revealed that he was diagnosed with cancer at the base of his tongue 3 years ago. “It was too big to operate, so they had to do high-dose radiation and chemo,” he explained.

Tucci was very reluctant to undergo this treatment, since he had seen the effects of this regimen on his first wife, Kate, who died from breast cancer in 2009. “I’d vowed I’d never do anything like that, because my first wife died of cancer, and to watch her go through those treatments for years was horrible,” he said.

He was equally concerned about how his illness would affect his five children. “The kids were great, but it was hard for them,” he noted. “I had a feeding tube for 6 months. I could barely make it to the twins’ high school graduation.”

Now, Tucci said that he is confident that the cancer is unlikely to return: “[Cancer] makes you more afraid and less afraid at the same time. I feel much older than I did before I was sick. But you still want to get ahead and get things done.”

And that’s exactly what he has done for the past 2 years. He launched a new CNN series, “Stanley Tucci: Searching for Italy,” and has written a book, Taste: My Life Through Food, which is set to be released in October.

Cancer of the Tongue
Cancers of the head and neck can form in the oral cavity (including the lips, the front two-thirds of the tongue, the gums, the lining inside the cheeks and lips, the floor of the mouth under the tongue, the hard palate, and the small area of the gum behind the wisdom teeth), the pharynx, the larynx, the paranasal sinuses and nasal cavity, and the salivary glands.

According to the Surveillance, Epidemiology, and End Results (SEER) Program, the estimated number of new cases of all types of tongue cancer in 2021 was 17,960 (0.9% of all new cancer cases), with an estimated 2,870 deaths. The 5-year relative survival is 68.1% for all stages. For patients with localized disease, the 5-year survival rate is 82.9%.

Signs and symptoms may include the following:

Smoking history of more than 10 pack-years and other tobacco use
Heavy alcohol use
Human papillomavirus (HPV) infection, especially HPV 16
Personal history of head and neck cancer

Treatment
As with any cancer, the treatment of patients with base-of-tongue cancer depends on a number of factors, including pathology, histology, clinical stage, patient’s age, and general medical condition. In patients with tongue cancer, immunohistochemical staining for p16 status is important.

Although effective, radiation therapy and CRT can have significant side effects and can affect quality of life. Common side effects include dry mouth, mucositis, speech issues, dysphagia, aspiration, or respiratory distress. Patients may require a feeding tube or tracheostomy during treatment to protect their nutritional status or airway.

It is essential that treatment approaches also include treatment of bilateral lymph nodes, either with radiation therapy or surgical resection.

Author:
Michele R. Berman, MD, is a pediatrician-turned-medical journalist. She trained at Johns Hopkins, Washington University in St. Louis, and St. Louis Children’s Hospital. Her mission is both journalistic and educational: to report on common diseases affecting uncommon people and summarize the evidence-based medicine behind the headlines.