Patients with head and neck cancer experienced an increase in epigenetic age acceleration, especially directly after treatment, which appeared associated with greater fatigue and inflammation, according to a study in Cancer.

“Our findings add to the body of evidence suggesting that long-term toxicity and possibly increased mortality incurred from anticancer treatments for patients with head and neck cancer may be related to increased epigenetic age acceleration and its association with inflammation,” Canhua Xiao, PhD, RN, FAAN, acting associate professor at Nell Hodgson Woodruff School of Nursing at Emory University, said in a press release. 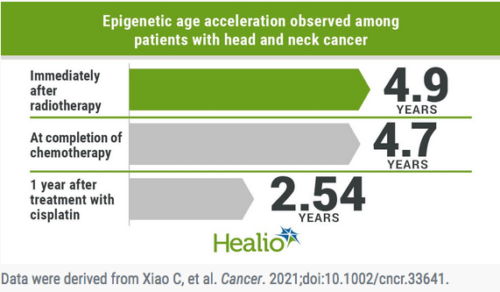 Because fatigue is prominent among patients with head and neck cancer and has been linked to poorer quality of life and survival, as well as symptoms that significantly impact diet and physical activity, Xiao and colleagues hypothesized that cancer-related and treatment-related adverse events or morbidities may represent accelerated aging trajectories.

Their prospective, longitudinal analysis included 133 patients (mean age, 59.19 ± 10.16 years; 72% men; 82% white) with squamous cell carcinoma of the head and neck, no distant metastasis and no uncontrolled major organ disease. Most of the patients (54%) had been diagnosed with oropharyngeal cancer, and 90% of those cancers were HPV related. The majority of patients (80%) underwent concurrent chemoradiotherapy, and 71% of those who underwent chemotherapy received cisplatin.

Researchers assessed all patients at baseline (approximately 1 week before radiotherapy), immediately after completing radiotherapy, and at 6 months and 12 months after radiotherapy. They collected demographic and clinical variables through questionnaires or chart reviews, measuring fatigue at all four time points with the use of the Multidimensional Fatigue Inventory-20 and measuring inflammatory markers with standard techniques.

Results showed significant EAA changes over time, with the greatest increase of 4.9 years (P < .001) occurring at the end of radiotherapy and a nonsignificant increase of 0.3 years persisting at 1 year after treatment compared with baseline.

Researchers also observed associations of increased EAA with higher fatigue over time (P = .003). Post hoc analyses showed patients with severe fatigue, experienced by half of the study population at some point during the period, had higher EAA (3.1 years) over the course of the study than those with low fatigue (P < .001). The increase in EAA appeared even more prominent among patients with HPV-unrelated tumors and severe fatigue (5.63 years) vs. low fatigue (P < .018).

Study limitations included a lack of standardization of blood-draw timing and the inclusion of mainly white men. Researchers called for further studies investigating the long-term relationship between EAA and later toxicities.

“Future studies could examine the vulnerabilities that may account for sustained high EAA, fatigue and inflammation among patients,” Xiao said in a press release.

Cancer-related fatigue is “an underrecognized problem” and is crucial in influencing patients’ treatment outcomes in addition to their quality of life, Kord M. Kober, PhD, assistant professor of physiological nursing at Helen Diller Family Comprehensive Cancer Center, and Sue S. Yom, MD, PhD, MAS, professor and vice chair in the strategic advisory department of radiation oncology and professor or otolaryngology-head and neck surgery, both at University of California, San Francisco, wrote in a corresponding editorial.

“Developing useable, efficient, systematized assessments of cancer-related fatigue should be prioritized because this would lead to increased clinical familiarity and a stronger foundation for developing and implementing effective treatment algorithms for patients at high risk,” Kober and Yom wrote. “Furthermore, the weight of the evidence seems to indicate that cancer-related fatigue is not just an ancillary symptom but a meaningful physiologic phenomenon reflecting a dangerous biology at work in these patients.”