With his recent hit culinary quest show, “Searching for Italy,” and food-focused cult films such as 1996’s “Big Night” and 2009’s “Julie & Julia,” Stanley Tucci has established himself as not just an actor but also a serious epicurean.

But, in his new memoir, “Taste: My Life Through Food” (Gallery Books), the 60-year-old reveals that he almost lost his love for food after he was diagnosed with an oral cancer four years ago.

“There were times when I believed I would never ever be able to cook or enjoy a meal again with the people I love,” writes Tucci, who grew up in a large Italian family in Katonah, NY, and spent a year living in Italy in his early teens.

When a dentist first told Tucci that the pain in his mouth might be due to an oral cancer of some sort, he writes that he “was stunned to the point of almost fainting.”

Kate, his first wife and the mother of three of his children, died in 2009 after a lengthy battle with breast cancer. He was eventually diagnosed with cancer of the salivary gland and was hesitant to get treatment having seen how painful and ultimately futile it was for Kate. But knowing the cure rate for his type of cancer was nearly 90 percent — and that his current wife, Felicity, was pregnant — he went through it.

Doctors initially wanted to remove the tumor at the base of his tongue, but that would have meant losing half his tongue and the ability to speak normally, which wasn’t an option. Chemotherapy and radiation would mean the loss of taste, smell and saliva production, but it would likely only be temporary.

For seven weeks, five days a week, he endured radiation treatments that required him to wear a special mask to immobilize his head. His side effects included severe vertigo, nausea and loss of appetite.

He was also plagued with digestive issues.

“The morphine I was given to dull the pain and help me sleep caused such dreadful constipation that at one point I thought it might only be relieved by the use of a mini pipe bomb,” Tucci reveals in the book.

While he was getting chemotherapy or required IV fluids, he, somewhat ironically turned to food TV to pass the time.

“This was an act of pure masochism, as even just the thought of food disgusted me. In hindsight I suppose it was a way to cling to what I loved or remember what I’d once had because I was so desperate to have it again,” he writes. “I was determined to make myself heal faster.” 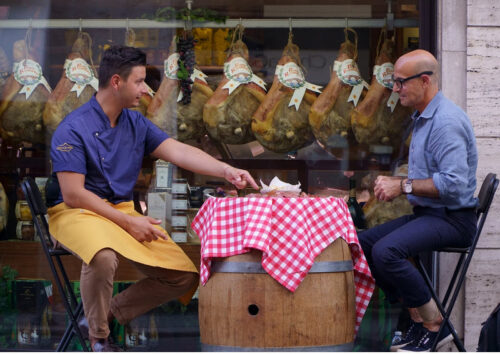 The treatments left him so weak and emaciated that, he “practically begged to have a feeding tube implanted in my stomach.” It remained there for six months, but even while relying on the tube for sustenance, it was important to Tucci that he ate well. He ultimately eschewed protein shakes in favor of cooking and pureeing the sorts of foods — pasta and beans in broth — he might have eaten in healthier times.

“I would struggle through the smell of the ingredients just to be able to stand at the stove and create something I knew I could eat,” he writes. “What it tasted like didn’t matter, as it was going directly into my stomach by way of the tube, but it was important to me that if someone were to eat it by mouth they would find it appetizing.”

At that point, he even relied on the feeding tube for water, because if he tried to actually drink water, “It burned like battery acid.”

Tucci, who lives in England, underwent treatment in New York. His brother- and sister-in-law, John Krasinski and Emily Blunt, let him and his family stay in their Westchester home. Other celeb buddies, including Oliver Platt, Colin Firth, Blake Lively and Ryan Reynolds, were also quite supportive.

Reynolds was by Tucci’s side, when, six months after his last treatment, he had a scan that showed “no evidence of disease.” But the side effects persisted.

“For over two years my mouth was incredibly sensitive,” Tucci writes. “I couldn’t drink anything carbonated and certainly could not eat anything spicy. I was able to drink and taste alcohol but mostly stuck to white wine with copious amounts of ice.”

He’s also struggled with having limited saliva and being prone to choking, especially with foods such as steak and bread, which proved difficult when filming the first season of his TV show.

Yet, such challenges have also made him appreciate the joys of eating and drinking.

Tucci writes: “My illness and the brutal side effects of the treatment caused me to realize that food was not just a huge part of my life, it basically was my life.”