They may look and smell a lot like candy, but dissolvable, smokeless tobacco products aren’t for kids. The safety and risks of “dissolvables” are the subject of a three-day U.S. Food and Drug Administration meeting this week. 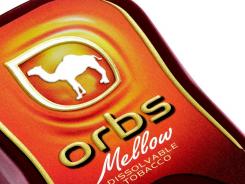 This is a concept of the Camel Orbs a smokeless tobacco product by RJ Reynolds company. The company is test marketing Camel Orbs, Camel Strips and Camel Sticks in two cities.

“Dissolvables” are flavored mints, strips and sticks of smokeless tobacco. These products are not stop-smoking aids. Instead, they are designed to allow people to satisfy their cravings for nicotine in places where smoking is banned.

“If you wanted to design a product that would appeal to youth and addict younger adolescents and adults to nicotine, this would be it,” said Dr. Jonathan Winickoff, a pediatrician at Massachusetts General Hospital in Boston. “These products are designed to look like a candy and addict the user permanently.”

Teens can pop these products without any of the telltale signs of smoking cigarettes or the mess associated with snus, which are teabag-like pouches placed between the upper lip and gun. Before long, he said, they’re addicted.

Another worry is accidental ingestion, resulting in nicotine poisoning. An April 2010 study in the journal Pediatrics showed that smokeless tobacco products are the second most common cause of nicotine poisoning in children, after cigarettes.

“If children are already ingesting cigarettes, we cannot doubt that they will ingest dissolvable tobacco that is specifically designed to taste good,” Winickoff said. “Just because they smell like chocolate or mint and look safe, they contain nicotine and are potentially harmful for adolescents and could start a lifetime of nicotine addiction. Parents of young children need to be aware that these products have the potential to cause a serious overdose.”

One milligram (mg) of nicotine can cause vomiting and diarrhea in a small child, according to the study. The Camel dissolvables contain between 0.6 mg and 3.1 mg of nicotine, depending on the product. Smokers inhale about 1 mg of nicotine in a typical cigarette.

When the Pediatrics study was released, Orbs manufacturer R.J. Reynolds stated that it had taken steps to prevent accidental ingestion of Camel dissolvable tobacco products by youth, including child-resistant packaging and educating poison control centers about the products and possible effects of accidental ingestion.

“The bottom line: Tobacco products, along with many other types of goods, need to be kept out of the hands of children,” the statement concluded.

Now all eyes are on the FDA. The 2009 Family Smoking Prevention and Tobacco Control Act gives the agency authority over the manufacture, distribution and marketing of cigarettes and smokeless tobacco products. Winickoff said he hopes the FDA will do whatever it can to keep these products away from children and teens.

“We could consider capping the amount of nicotine in each piece so you could eliminate or drastically reduce potential to cause a fatal nicotine overdose if the entire package was consumed,” he said.

Other pediatricians and public health advocates raise similar fears about these products.

“You can sneak them into a classroom,” said Dr. Lee Beers, a pediatrician at Children’s National Medical Center in Washington, D.C. “This increases the potential for early tobacco adoption and increasing levels of addiction. There doesn’t really seem to be any reason to have tobacco in a format that is much more easily ingestible and with quite a few downsides, particularly when think about children and adolescents. Children can and will get into anything even if the packages are childproof,” she said.

Dr. Thomas Glynn, director of cancer science and trends at the American Cancer Society, said there are many unknowns about dissolvable tobacco products. “At this point, we don’t know the full range of what is in them,” he said. “I don’t see any potential in these dissolvable products other than to keep people smoking.”